Rhinoplasty is literally defined as the shaping of the nose. It is a plastic surgery procedure that can reshape the nose in a variety of ways. The overall size can be reduced or increased, a hump can be removed, the span of the nostrils can be narrowed, the tip or bridge of the nose can be reshaped, or the angle between the nose and upper lip can be changed. Some breathing problems can also be alleviated with rhinoplasty.

Individuals who are looking to improve the appearance of the nose may be good candidates for this procedure. Some people are looking to improve the nose they were born with while others are dissatisfied with changes that have occurred through age or injury. As with all surgery, patients should also be in good health and be realistic in their expectations for the outcome. It’s generally advised that a rhinoplasty be postponed on younger patients until the nose has reached its full growth, typically around the age of fifteen or sixteen. During your consultation, Dr. Donath will help you to decide if rhinoplasty is right for you. He will take certain factors into account like your age, skin type, and ethnic background and he may recommend additional surgery, such as chin augmentation, to help you achieve your desired look.

Rhinoplasty Before and After 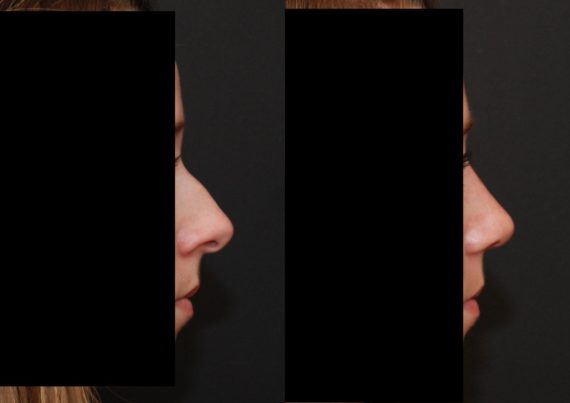 Before and After Photos

*Each patient is unique and individual results may vary.

Local anesthesia with sedation or general anesthesia may be used for the rhinoplasty surgery. Dr. Donath will begin by making incisions, most of which are located on the inside of the nostrils. It may be necessary to make an additional small incision on the skin between the nostrils. Working through the incisions, the doctor will achieve the desired shape by removing, adding to, or rearranging certain amounts of bone and cartilage. Once the new shape is achieved, the incisions will be closed and a splint will be applied to the nose. Nasal packing, or soft absorbent material, may also be applied to the inside of the nostrils. While surgical times will vary, rhinoplasty usually takes one to two hours to complete.

Nasal packing, if used, is typically removed the next day while the splint will be removed after about six to seven days. The face will likely feel puffy and patients may experience some discomfort which can be managed with prescription medication. Swelling and bruising are common, with the majority of swelling fading within two weeks. Absorbable sutures are commonly used, and these do not need to be removed. Most patients are able to return to work within one to two weeks after their procedure, though rigorous activities and sun exposure will be prohibited for several weeks.

Rhinoplasty, or nose surgery, is a plastic surgery procedure designed to reshape the nose and sometimes relieve breathing problems. The surgery can reduce or increase the overall size of the nose, remove a hump, narrow the span of the nostrils, alter the tip shape, alter the bridge shape, or change the angle between the nose and upper lip.

Is rhinoplasty right for me?

If you are looking to improve the appearance and/or function of your nose and are physically healthy and realistic in your expectations, a rhinoplasty may be right for you. Dr. Donath is happy to meet with you for a consultation to help you decide if can address your needs.

Are there any age restrictions for undergoing rhinoplasty?

Rhinoplasty should be postponed on younger patients until the nose has reached its full growth. This tends to occur around the age of fifteen or sixteen.

What happens at the consultation for rhinoplasty?

During the consultation for rhinoplasty, Dr. Donath will meet with you to examine your nose, discuss your goals, and take a thorough medical history. He will weigh other factors like age, skin type, ethnic background and attitude toward surgery to help determine if is right for you. He will take the time to explain the technique, the anesthesia, the surgical facility, the risks, and the costs and will also answer any questions that you may have.

What anesthesia is rhinoplasty performed with?

Rhinoplasty may be performed with local anesthesia and sedation or with general anesthesia.

How is the surgery for rhinoplasty performed?

Dr. Donath begins by making incisions, many of which are located on the inside of the nostrils, though an additional small incision on the skin between the nostrils may also be necessary. Certain amounts of bone and cartilage will then be removed, added to, or rearranged in order to achieve the desired shape. The incisions are then closed, a splint is applied to the nose, and soft absorbent material known as nasal packing may be applied to the inside of the nostrils.

How long is the surgical time for rhinoplasty?

Rhinoplasty may take one to two hours on average to perform.

I went a saw Dr. Donath a few days ago for a consultation on a rhinoplasty. I asked the nurse before about doing the non surgical route and if it would even be possible. She said we can ask him. His whole staff are SO SWEET. I never felt judged and was so comfortable asking anything that popped into my head.

Where are the rhinoplasty incisions located?

Most of the incisions for a rhinoplasty are located on the inside of the nostrils. In some cases, a small incision may need to be made on the skin between the nostrils.

Will I have scars after my rhinoplasty surgery?

The incisions made on the inside of the nostrils result in no visible scarring. If an additional incision is made on the skin between the nostrils, there will be a small, well-concealed scar.

Does rhinoplasty involve much pain?

Some discomfort and a puffy feeling of the face may occur which can be controlled with prescription medication.

Patients can expect the face to feel puffy and to appear swollen and bruised. Most of the swelling will fade within about two weeks. Some discomfort can be expected, though this can be managed with medication. If nasal packing is used, it is typically removed on the day after surgery. The splint is usually removed within six to seven days. Absorbable sutures are often used and these dissolve on their own.

When will I be able to resume work after my rhinoplasty surgery?

Work and most other normal activities can usually be resumed within one to two weeks after the surgery.

When will the stitches be removed after my rhinoplasty procedure?

Sutures are often absorbable and need not be removed as they will dissolve on their own.