Chin-augmentation is a plastic surgery procedure that can improve the appearance of the chin and create better harmony among the facial features. The surgery can achieve a more balanced profile by building up a receding chin or by reducing an overly prominent chin. It is also possible to add definition to the chin or neckline through submental liposuction which removes excess fatty tissue.

Individuals who are looking to improve the appearance of either a receding or overly prominent chin may be good candidates for chin augmentation. As with all types of cosmetic surgery, patients should also have realistic expectations for the outcome of the procedure and be in good health. Chin-augmentation is often recommended as an adjunct to rhinoplasty because a more prominent chin can help to balance out the appearance of the nose. During your consultation, Dr. Donath will help you to decide on the type of surgery that best addresses your needs.

Local anesthesia with sedation or general anesthesia may be used for the chin-augmentation surgery. Dr. Donath will begin by making an incision just under the chin within a natural crease or on the inside of the mouth where the lower lip and gum meet. To build up a receding chin with an implant, the tissues are stretched and the implant is inserted over the front of the jawbone. The incisions are then sutured closed. The chin may also be built up by moving the bone forward. To reduce an overly prominent chin, the bone is sculpted to the desired size. Chin-augmentation typically takes thirty minutes to an hour to complete, though more extensive procedure can take several hours.

Any dressings applied to the chin after surgery are usually removed within two to three days. Some tenderness or discomfort may occur and can be controlled with prescription medication. Patients may need to follow a liquid or soft food diet for the first few days as chewing may be limited. Swelling and bruising may occur with the majority of swelling fading within six weeks. Stitches may be removed within five to seven days. Incisions made on the inside of the mouth will leave no visible scarring while those made on the underside of the chin will result in a small, well-concealed scar that will further fade with time. Most patients are able to return to work and other normal activities within about ten days, though rigorous activities may be prohibited for several weeks.

Chin Augmentation Before and After 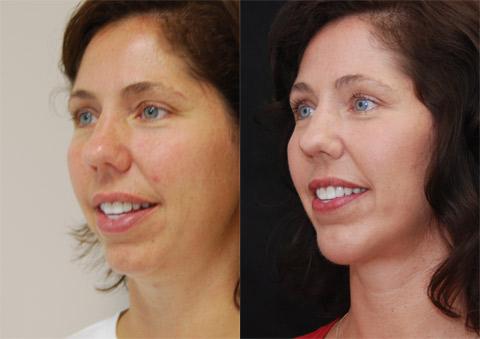 Before and After Photos

*Each patient is unique and individual results may vary.

Chin-augmentation is a plastic surgery procedure designed to improve the chin’s appearance. Chin-augmentation can be used to build up a receding chin or reduce an overly prominent chin. The surgery can achieve a more balanced profile and better harmony among the facial features. Another option for augmenting the chin is submental liposuction which removes excess fat for better definition in the chin or neckline.

Is chin-augmentation right for me?

If you are looking to build up a receding chin or reduce an overly prominent chin and are physically healthy and realistic in your expectations, then chin augmentation may be right for you. It is not uncommon for chin-augmentation to be recommended as a complement to rhinoplasty because the chin can help to balance out the nose. Dr. Donath is happy to meet with you for a consultation to help you decide if chin-augmentation is right for you.

What happens at the consultation for chin-augmentation?

During the consultation for chin augmentation, Dr. Donath will meet with you to examine your chin, discuss your goals, and take a thorough medical history. Bringing in pictures of chins you find desirable can help you to convey your goals. Dr. Donath will also weigh other factors like age, skin type, and attitude toward surgery to help determine if chin augmentation is right for you. He will discuss the technique, including the anesthesia and the surgical facility, along with the risks and the costs involved. The doctor will also take the time to address any questions or concerns that you may have.

What anesthesia is chin-augmentation performed with?

Chin-augmentation may be performed with local anesthesia and sedation or with general anesthesia.

How is the surgery for chin augmentation performed?

Dr. Donath begins the chin-augmentation surgery by making an incision on the inside of the lower lip or on the skin just under the chin. The chin may be built up by inserting an implant over the jawbone or by moving the bone forward. An overly prominent chin can be reduced by sculpting the bone to a more desirable shape. The incisions are then closed.

How long is the surgical time for chin-augmentation?

Chin-augmentation may take thirty minutes to an hour to complete. More extensive procedures may take up to several hours.

Where are the chin augmentation incisions made?

The incision for chin augmentation may be made on the inside of the lower lip where it meets the gum or within a natural skin crease on the underside of the chin.

Will I have scars after chin-augmentation surgery?

When the chin-augmentation incision is located on the inside of the mouth where the gum and lower lip meet, there is no visible scarring. An incision made on the underside of the chin within a natural skin crease will result in a small, well-concealed scar.

Does chin-augmentation involve much pain?

Some tenderness or discomfort can be expected after chin-augmentation which can be controlled with prescription medication.

Patients may experience some discomfort and tenderness after chin-augmentation surgery which can be managed with medication. Because chewing may be limited for the first few days, a liquid or soft food diet may need to be followed. If a dressing is applied to the chin after surgery, it will be removed within about two to three days. Stitches are removed after five to seven days. Swelling and bruising are common and most of the swelling will fade within about six weeks.

When will I be able to resume work after my chin-augmentation surgery?

Work and most other normal activities can usually be resumed within about ten days after the chin-augmentation surgery.

When will the stitches be removed after my chin-augmentation procedure?

Stitches are usually removed or dissolve on their own after five to seven days.

What chin augmentation office is near me?

If you live in the states of Ohio or Kentucky, Cincinnati Facial Plastic Surgery offers chin augmentation among its services. For a full list of services, please visit our Locations page.